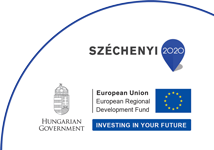 The project was realized with the support of European Regional Development Fund and Széchenyi 2020.

Do you want to play? You can collect a Botanical Garden Quiz at the Counter and get to know the Arboretum better.  The price of the Agora ticket includes a free entry to the Botanical Garden.

About the Botanical Garden

The herb garden in Debrecen dates back more than 200 years. It was established in 1807, and it moved to its final location in the 1920s. The city of Debrecen has designated an area of 17 hectares behind the University for this purpose in the Great Forest.
Today’s Botanical Garden was founded in 1928. Scientific and aesthetic tasks were set for the place. The systematization of the plants, and the creation of demonstration spaces, walkways and a rock garden began. The first greenhouse, the wintering area and a pond with a concrete bottom were also built.
The garden, which was developing at a fast pace, unfortunately became a victim of World War II. The reconstructions began in 1947. In the process 2 new greenhouses were established, as a result of which the number of tropical plant species increased rapidly. Later, it was possible to build a plant taxonomic garden, create a rich greenhouse collection, and establish a succulent and cactus collection.
In 1975, a new palm house was handed over, making it possible to further enrich the tropical plant collection. The soil of the palm house can be heated, and thanks to the design of the sprinkler system, conditions have been created where even banana can ripen.
In 1976, the built-in 13.7-hectare botanical garden was declared a Nature Reserve.

After the continuous expansion of greenhouses, the Botanical Garden now has a unique collection in Europe consisting of 1,300 species of cacti and 1,000 other succulents. The arboretum collection is also growing year by year: the size and the beauty of the evergreens, pines – planted in the early 1980s – are one of the most amazing sights during the arboretum walk.
More than 750 woody species can be seen in the garden. These include special herbaceous and tropical collections, all four cedar species known in the world today, and a unique plant association called Lily of the Valley Oak.
The number of plant species currently exceeds 6000.